I went out on a limb this week and decided to think outside the box and go to the Breakfast Bistro in the east end “Burger at a breakfast joint” is not something you would typically hear from the Burger Shake Club.

My celebrity guest was none other than everyone’s favourite Roughrider Ryan Smith……er….. Ryan Dressler ……..dammit, Weston Dressler!
Weston has known for some time he would be my guest of honour as we have shared many delicious burgers over the years and I wanted to do him the honour of joining us for lunch.
Once seated, our witty banter was at an all- time high between the founding fathers but Dressler was lost in thought as he visually assaulted the breakfast menu and dessert cooler.
We all chose the “Bistro Burger” ( only burger on the menu) and ordered it to our individual specifications as it comes adorned with red onions, avocado, and other veggies and sauces I can’t pronounce.
Once it arrived with fresh thick bacon on the side to eat separately or add to the burger, pretzel buns (imported from France) and patties infused with Pork we all got down to business.
The hand- made patties have a unique taste and are not your typical burger but delicious all the same. Everyone enjoyed the burgers and raved about the pretzel bun. The only time it was difficult to enjoy the burger was when Danny Y wouldn’t stop giggling like a school girl because Premier Brad Wall now follows him on Twitter.
Jason did his best to corral his ketchup and burger juices but inevitably spilled it on his dress shirt and personalized Danny Y BS Club place mat (soon to be sold online for $3.99). It was a daring choice but also a successful choice as the burger ratings were favourable:

With a good start to our day and a belly full of burger we took a quick trip around the corner to Marble Slab Creamery.

As we entered we became excited as the décor looked as though Strawberry Shortcake and Willy Wonka had married and started an interior decorating business. The place looked like an ice cream paradise.
By this point the burger had awoken Dressler from his mid –day fog and he was vibrant and ready to tackle a milkshake.
The choices at the Marble Slab were abundant and JC and I went with a chocolate, cookie dough concoction while Danny Y and Dressler went another route. We were all very excited watching the process of our shakes being created but that excitement quickly vanished as we were handed our shakes, not in cold metal tins, and watched as the shake tried to spill over the side of the cup and join the burger juices on JC’s dress shirt.
Right then and there I knew I had made the wrong choice. The Shakes were flavoured liquid. No thickness, no extras and it left a “chalky” aftertaste. I knew I was in for a ratings nightmare when I looked into Danny Y’s sky blue eyes and saw nothing but disappointment. I have never felt so ashamed in my life.
Letting down the human hoover of milkshakes was heartbreaking.
Dressler tried to keep a positive outlook but it was too far gone. JC, as of being dropped off from lunch had still not finished his shake and protested he would, but I knew it was a hollow promise. By far one of the most disappointing shakes we have had to this point:

The Milkshake made it so I had no chance to win this round and in fact came last by a large margin.
Thanks again to our celebrities: Mr. Brad Wall, Mr. Dan Farthing and Mr. Dressler , you were all worthy of our BS Club lunches.
Congratulations to Mr. Clermont for winning the Celebrity Round
Next round is his choice, will it be the home round, redemption round, mission impossible round or some other creation of JC’s.

Stay tuned to find out. 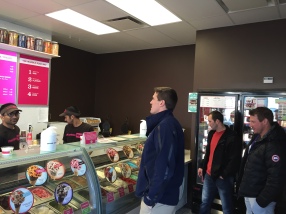