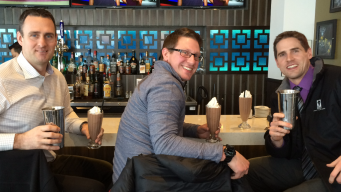 The title pretty much speaks for itself here folks….

I took a hard hit choosing Lancaster’s bacon cheddar cheese burger, but had a decent comeback with Ricky’s All Day Grill chocolate milkshake.

In the end I did fall short but I am fighting hard to keep a second place finish in this ‘reservation’ round.

To clarify, Lancaster’s accepts reservations online and they will even put your name on the table to show that it is reserved for you…I didn’t do that, but they can.  It was lunch, you don’t really need to make a reservation!

Bun tasted good, but nothing extraordinary.  Patty tasted alright but was too small for the bun it came in.  The cheese was very good, but not distracting enough from the other burger qualities.  Bacon on the burger was good, but it was diced and mixed with onions.  Two of us didn’t mind this, but one member (mentioned above) wouldn’t stand for this monstrosity and that was that.  Burger was a bust!

I was not feeling very great leaving the burger section where I got destroyed, but Ricky’s All Day Grill changed that for me in about 5-7 minutes!  I think that our server could see the defeat in my face and she knew that if she didn’t make the best damn shake of her life, than that poor sucker out there might end it!!!!

I tell ya, this girl came through in a huge way! She brought out 3 chocolate shakes in tall, glass diner-like glasses topped with whipped cream.  Then she brought out three large tin cups with the remainder of our shakes in them.  Not to mention, long spoons so you can get ALL the way to the bottom of the cup!!!  It was a shake lover’s dream, and this guy didn’t want to wake up!

Though it may not have been enough to overtake JC’s Keg round, it was a great shake experience that I am glad we came across and were able to share with all of you!!!