Spoiler Alert:  Its only fitting that Mikey wins the ‘Redemption Round’ as he has used mercy to redeem himself on more than one occasion.

To be clear, this is not to be confused with Mikeys redemption from taking us to the Polar Palace (which was closed for the season) or the time that he felt too ill from the Rita challenge to eat his milkshake, so was granted a one day extension on the shake.  Further, it should not be confused with the Shamrock shake chosen that next day which tasted like an old chalky mint from Grandmas pocket (not YOUR grandma, someone else grandma who also keeps an often used handkerchief in that same pocket).  The Shamrock was tossed and Mikey was granted a mulligan as we headed back to McDonalds for a chocolate shake.

To be fair: He’s proved to be the King of Redemption and has earned the crown this round.

I’m not saying that I waved the white flag, but the 5.5 point improvement in Mikeys choice of Carl’s Jr. was a massive undertaking. So I decided that if I was going down, it would be with a delicious burger and shake in my belly!

The Wendy’s Baconator scored well the first round and didn’t really need redemption.

The BK Shake is where I was looking for redemption.  When we went the first time, the choice to not order a chocolate shake was a grave mistake.  You will be hard pressed to find a drive through establishment that serves up a more delicious and thick chocolate milkshake.

We dined in this time to take in the ambience of the Kings lair.  To soak in the smell of whopper sauce and onions and to allow Danny Y to negotiate, face to face, with our server.

Danny Y:  Can I mix Oreo and Chocolate together in a milkshake?

Danny Y (with a whimper and single tear rolling down his cheek): You can’t use the chocolate shake to make my Oreo milkshake instead of Vanilla?

She made him a pity shake, which he was not too proud to accept.

It was an improvement from the first round, the rankings improved slightly but Mikey was nervous about securing his pending victory and may have underrated the thickness (in my opinion).  A little like the basehead from Menace II Society who had them cheeseburgers.  We all remember what lengths he was willing to go to…

All in all, a good round with entertaining banter and delicious burgers and shakes all around.

Good choice on redemption round Danny Y, and a tip of the hat to Mikey on the victory! 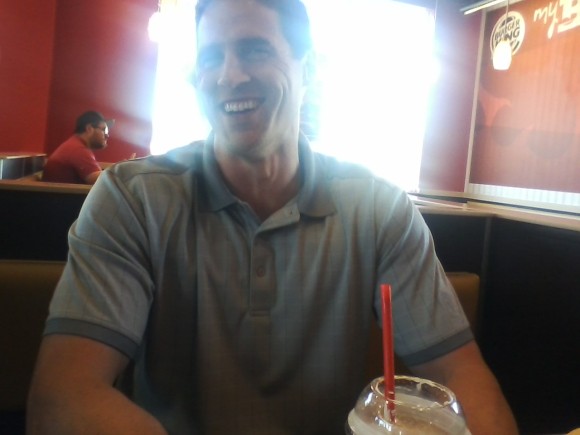 Stay tuned for Mikeys round choice as well as an upcoming blog post from an invitation to a burger lunch to commemorate the BS Clubs 1 year anniversary.  This calls for rings (onion rings) – JC

Failing to prepare is preparing to fail.

That is why I took my kids on a reconnaisance mission to test out a few drive thru burgers and shakes before the main event.  Call it the preseason for BS Double Drive thru, call it research and development or call it lazy parenting when dad has to feed the kids:  All descriptions are accurate.  No matter what you call it though, it stacked up to a big win on game day.

Always hot, always fresh and always 2 patties and lots of applewood smoked bacon.  Its a can’t miss when you want a good burger from the drive through.  It is my favourite fast food burger, so I knew what I was getting myself into and hoped my fellow founding members of BS would share the same sentiment.

It was perfect.  Best Baconator I have ever had, which led me to circle the top score taste (#10) while still reeling in the euphoria of beef, cheese and bacon.  This led to a debate, quite heated actually, in reaching the penultimate score for taste when judging a burger.  The score of ’10’ leaves no room for improvement, no hope for untasted burgers the world over.  I agreed with the very passionate and loud Mikey, and edited my taste score to 9.25.

I also plan to get a tattoo on my arse with a picture of Wendy herself, holding a Baconator and wearing a hat that simply says ’10’.  That way, when I’ve tasted my last drive thru burger and none have topped the mighty Baconator, then Mike can pucker up and give Dave Thomas’s daughter a big wet kiss.

4 solid flavours to chose from.  Vanilla, strawberry, chocolate and OREO.  I loved the chocolate shake during my research phase, but I cracked under pressure on game day.  We all went with OREO.  Very good shake: Thick, whipped topping, large OREO chunks.  It beats most shakes and definitely most OREO versions.  My own decision to not go with chocolate hurt my score.  Danny Y barely came up for air, he may have actually gotten his milkshake pregnant in hopes of having little baby milkshakes later in the day (milkshakes don’t carry for a full 39 week term like humans, but this is a blog not a science class).  Mikey complained at random about the taste of vanilla and blah, blah, blah until finally letting the sour taste of the almost perfect 10 debacle leave his bitter mouth to enjoy the masterful OREO shake like the rest of us.

Quotable:  “Your state of mind clearly is not allowing you to make proper judgements right now”  – Mikey on whether my mind was on BS Club or a pending vasectomy

“You can’t just slip into the quote that you might be getting snipped!” – Me after reading what I just wrote

Wendy can’t resist the King. Have it your way! 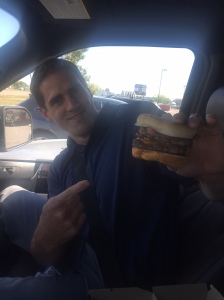